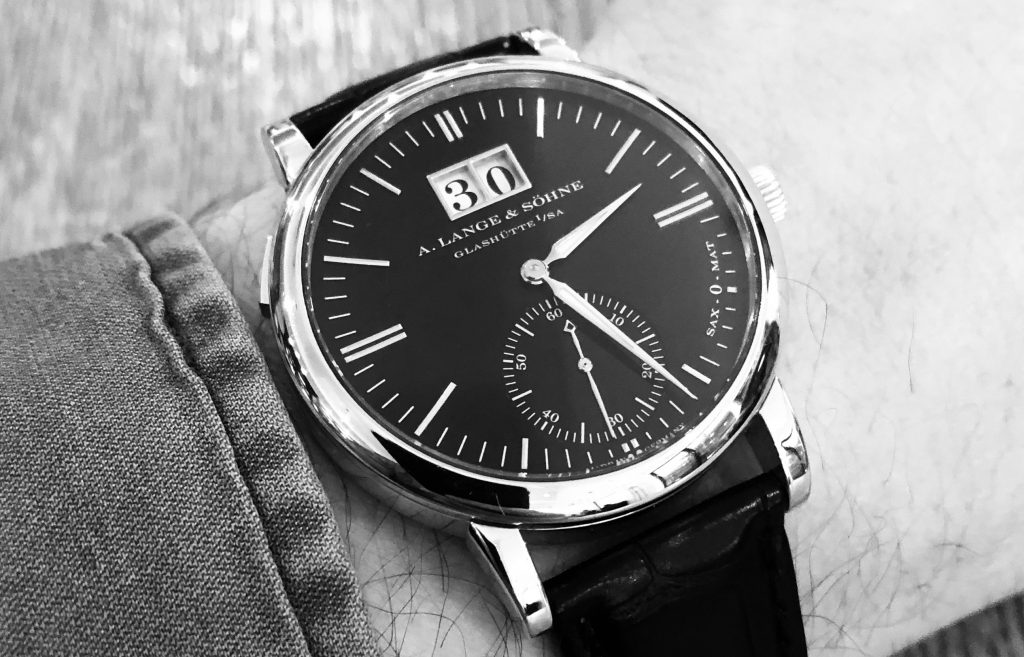 High horology meets everyday practicality in this compact piece from A. Lange & Söhne, the personal choice of the late Walter Lange.

With A. Lange & Söhne, it is all too tempting to focus only on the extraordinary top tier of their production – for example, the hypnotic steampunk precision of the jumping minutes on the Zeitwerk, the technical bravado of the Triple Split or the artistry of the Terraluna.

What about the watches that us mere mortals can afford?  In my opinion, Lange is just as compelling at its ‘entry’ level as it is at its very highest end.  Unlike many of the other great watchmaking brands, Lange does not ‘build to a price’.  A core element of the brand’s philosophy is that every watch it produces is finished to the same level of baroque perfection, whether that be the Grand Complication ($2.6 million USD) or the 37mm Saxonia (a ‘paltry’ $14,800 USD).  At either end of the spectrum, you can be assured of getting a beautifully decorated movement which works flawlessly and simply could not have been made by any other brand.

This week’s watch, the 308.031, is from my own collection (in fact, I have just celebrated my one-year ownership anniversary).  In accordance with Lange’s numbering conventions, the first three digits (308) indicate the model (Langematik with big-date at 12 o’clock, 37mm case) and the last three digits (031) indicate the metal/dial combination (in this case, pink gold with black dial).

The 308 series is no longer in production.  My example dates from 2007.  It can be purchased on the used market for around $20,000 USD, depending upon condition, completeness and dial/metal configuration.  The platinum version goes for a premium compared to the yellow/white/pink gold versions. Most of the watches in the 308 series were sold on a leather strap with pin buckle matching the metal of the case, however, it’s also possible to find them with a deployant clasp, and in rare instances a full precious metal bracelet.

The watch is powered by Lange’s first automatic movement, the L921.2, which debuted in 1997.  It features Lange’s take on the micro-rotor – in this case, a ‘three-quarters’ rotor.  Cosmetically, the architecture of the L921.2 resembles the layout of Lange’s manually wound three-quarter plate movements, but with a circle gouged out to hold the rotor.

Unfortunately, it appears like the L921.2 is on the way out.  Currently, it is only used as the base caliber for the Langematik Annual and Perpetual Calendar models.  Its place in the Lange range is being progressively replaced by the Calibre L086.1, a model with a centrally-mounted rotor which, in my opinion, is not quite as attractive.

Like all of Lange’s movements, the baseplate and bridges of the L921.2 are in the ‘german silver’ alloy.  The rotor is in 22k gold beautifully engraved, with peripheral weight in 950 platinum to increase winding efficiency. 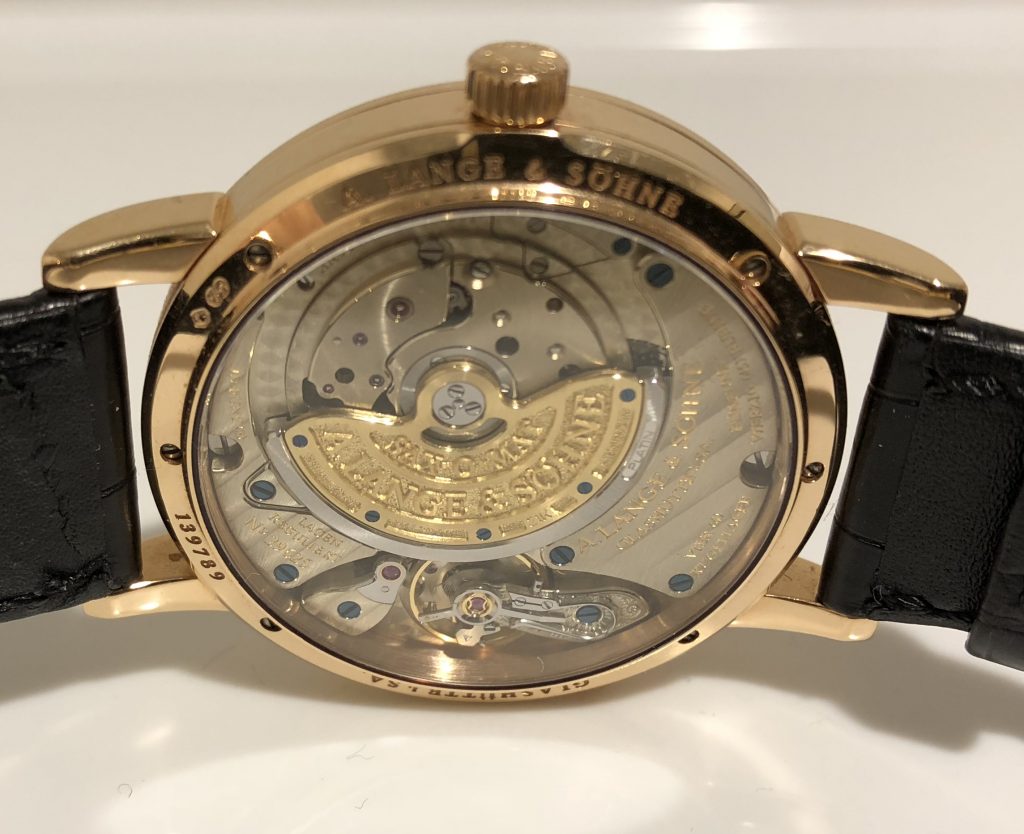 The finishing is, predictably, wonderful, with beautiful anglage on all edges, black polish on the mainspring barrel and cock for the escape wheel, gold chatons holding several jewels and beautiful heat blued screws.  The balance cock is engraved by hand and can be attributed to a particular artisan at the manufacture.  The Glucydur screwed balance features a swan-neck regulator.  In practice, I have been very impressed by the chronometry of the watch.  It has never varied from the atomic clock by more than 3-5 seconds per day. 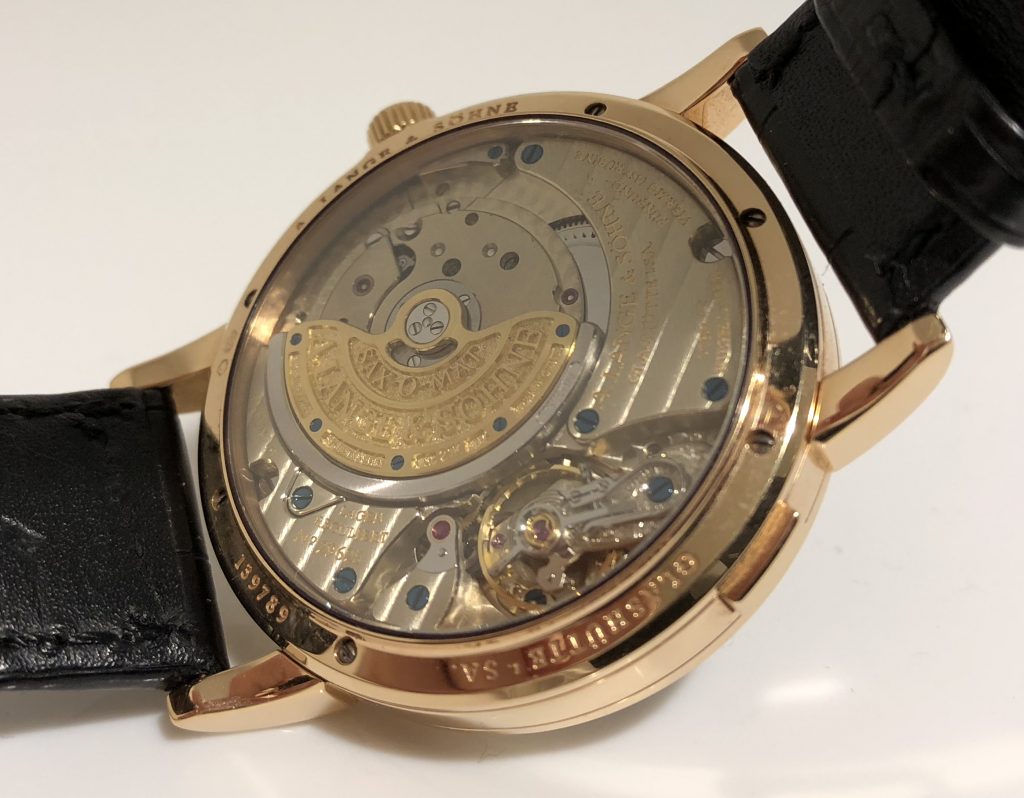 It also has a party trick – the zero reset (designated by the ‘Sax-0-Mat’ text between 3 and 5 o’clock on the dial).  When the crown is pulled out to the first detente, the seconds hand does not simply ‘hack’ – it returns to zero, in the manner of a chronograph seconds hand.  Another example of Lange’s pervasive perfectionism, but one which unfortunately has not migrated to the new line of automatic movements.

Another useful feature is the pusher at 10 o’clock, which is used to advance the date to correct for months with less than 31 days (or to quickly reach the correct date if the watch has not been running for a while).  Pressing the pusher is a sheer tactile delight, as good as the very best column wheel chronographs, with just the right amount of resistance and a reassuringly solid click when the dual date wheels advance in unison. 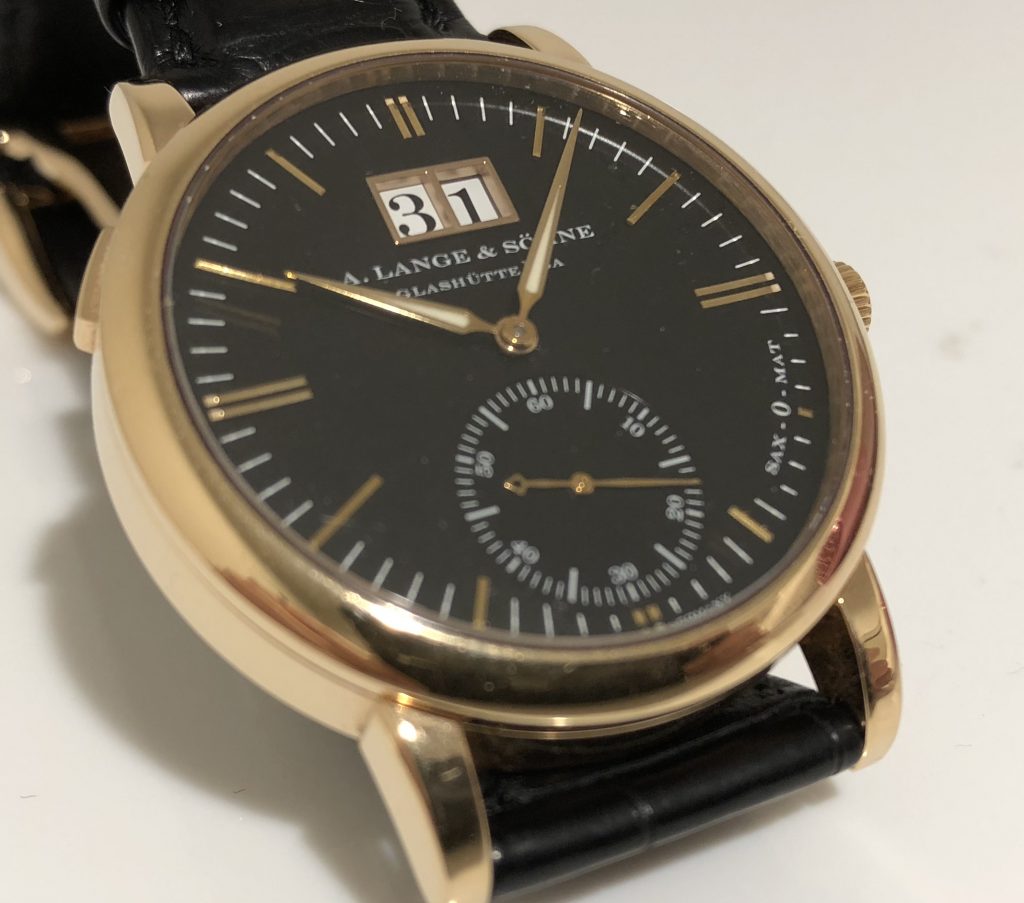 Compared to the dramatic, rococo presentation of the movement, the sober dial conveys the impression of a precision machine transported to our world from an alternate dimension in which levers, springs and gears remain the cutting edge of time-measuring technology.  The big date is extremely legible and the shape and length of the minutes hand enables precise setting to a reference time.  The hour and minutes hands even have a little lume, which often came in handy navigating the darkened corridors of our old apartment building after the central lights had been turned off (I’m in an industry renowned for its late nights at the office).  And for me, the 37mm size is simply perfect, a great midway point between the true vintage men’s sizes (31-34mm) and the modern trend towards oversized watches (40mm plus).

Anyone looking for a well-rounded piece of functional high horology would do well to put it on their shortlist.  It is, of course, extremely expensive, but not so prohibitively priced that a determined collector could never hope to acquire it.  Anybody who does buy it will be in august company.  As reported by Hodinkee, the late Walter Lange, patriarch of the resurrected manufacture, wore it (in yellow gold, cream dial) every day for years.  Which really is the ultimate insiders endorsement.