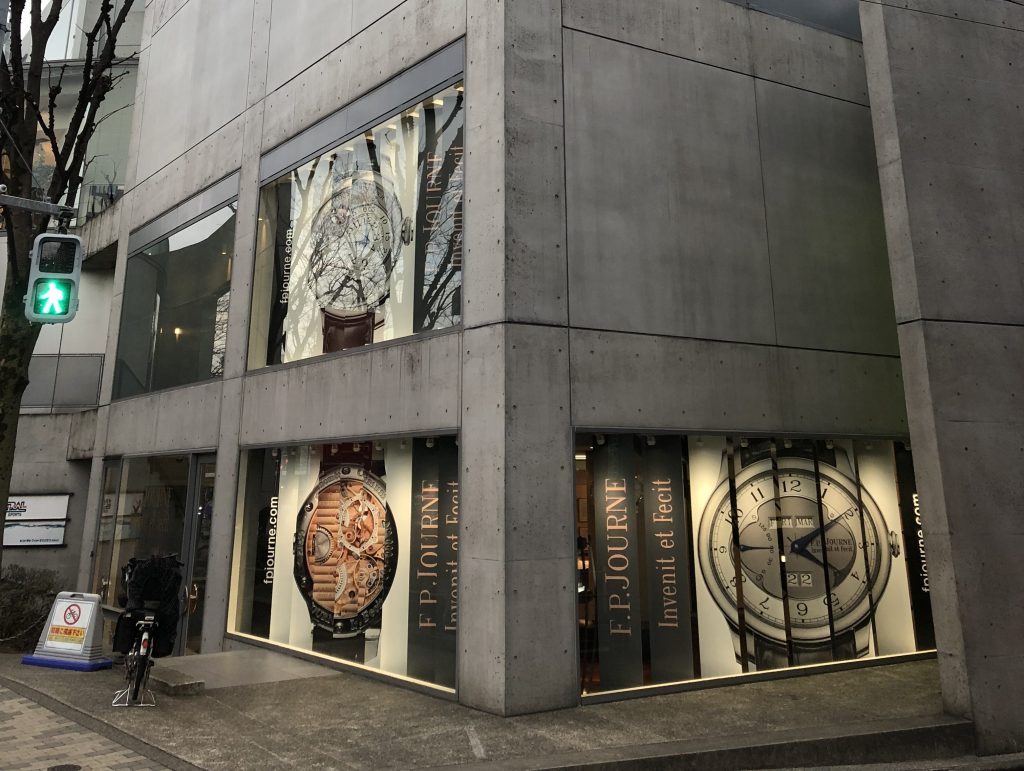 A temple of horology and a wonderful place to spend an afternoon viewing and discussing some of the finest watches on the planet.

F.P. Journe has been open for business in Tokyo since 2003, with its boutique occupying two floors of an elegantly minimalist Tadao Ando building in chic Aoyama, not far from the Omotesando boulevard.  The brand now has eleven boutiques around the world (most recently opening a branch in Beirut), but this one was the first.

No brand is so intimately connected to a single individual as F.P. Journe is to François-Paul.  Like the man, the brand is defiantly francophone, with its unique and polarising Jules Verne, art-nouveau aesthetic.

The affable sales associate (who approached his product more in the manner of an art curator, rather than as a salesman) informed me that, in addition to ‘inventing’ and ‘making’ all of the watches (Invenit et Fecit), M. Journe also designed the watchmaking furniture on display in the boutique. 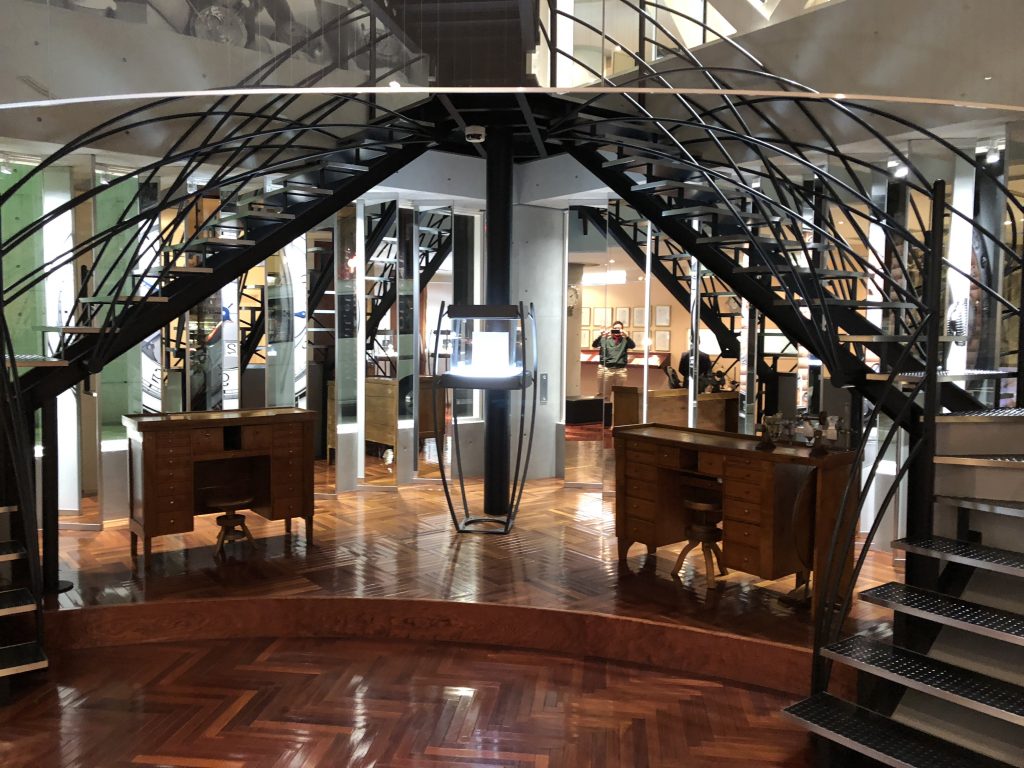 Little design touches help to further draw you into the aesthetic world M. Journe has meticulously built over the course of his career.  I particularly liked the door handles, fashioned in the image of Journe’s signature barleycorn guilloché winding rotors. 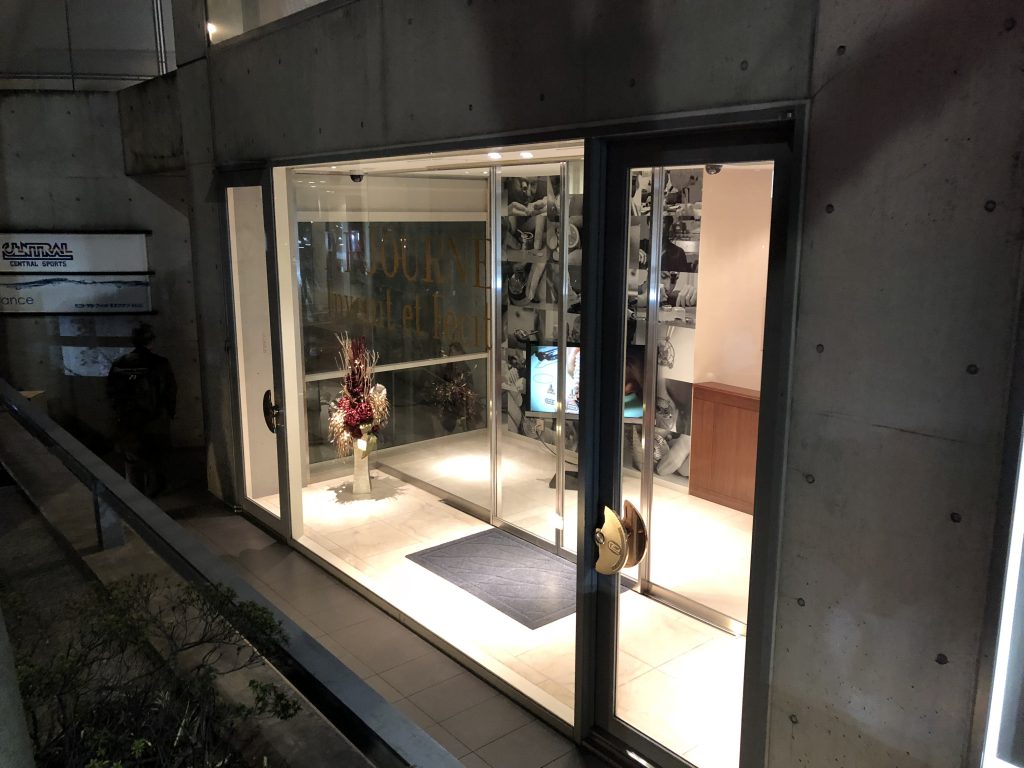 Now on to the watches.  My wife tried on two.  The first was the smallest round watch in the Journe collection, the Octa Automatique Lune in platinum with white gold dial, 36mm.  My wife’s verdict – lovely, but still too large for her.  She is a traditionalist when it comes to the sizing, owning nothing larger than 28mm.  The ‘boyfriend-watch’ trend has bypassed her entirely. 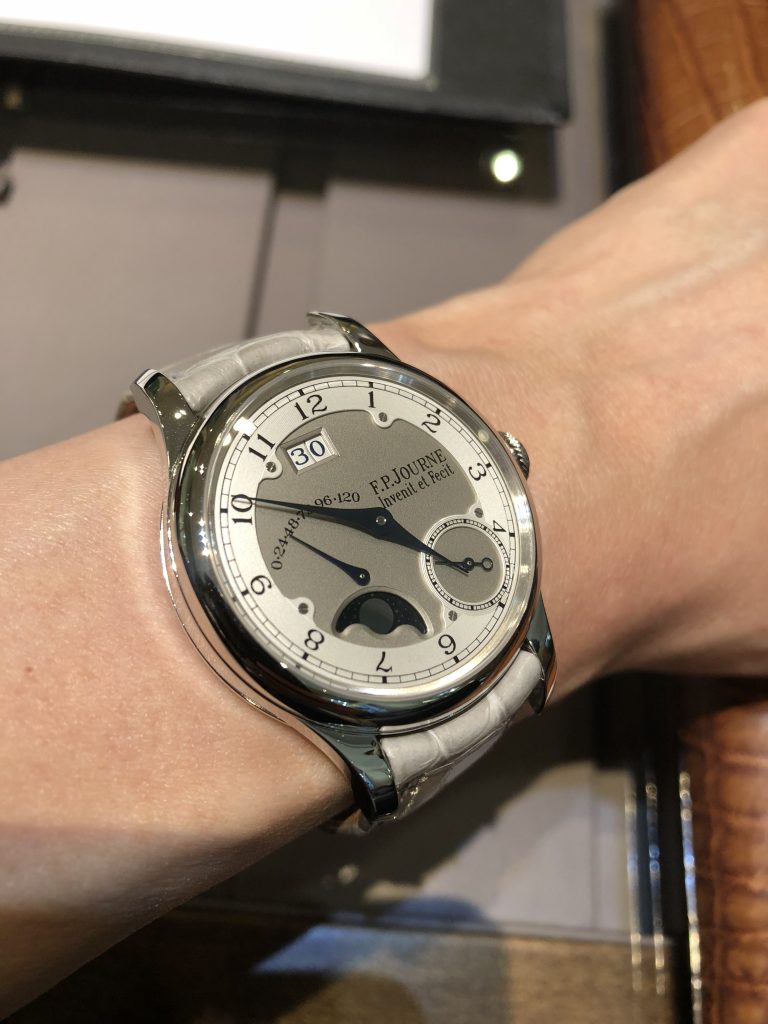 Next was the ladies non-diamond set version of the new(ish) Elegante, in navy and titanium, with impressive Super-Luminova dial, visible rotor at 4 o’clock (to wake the watch from battery-preserving ‘hibernation’ when put on the wrist), deployant clasp, and fine smooth rubber strap and bezel detailing.  My wife is fond of luminescent dials as well as tonneau cases, but was unmoved by this piece, the whole (in her estimation) not being the sum of its parts. 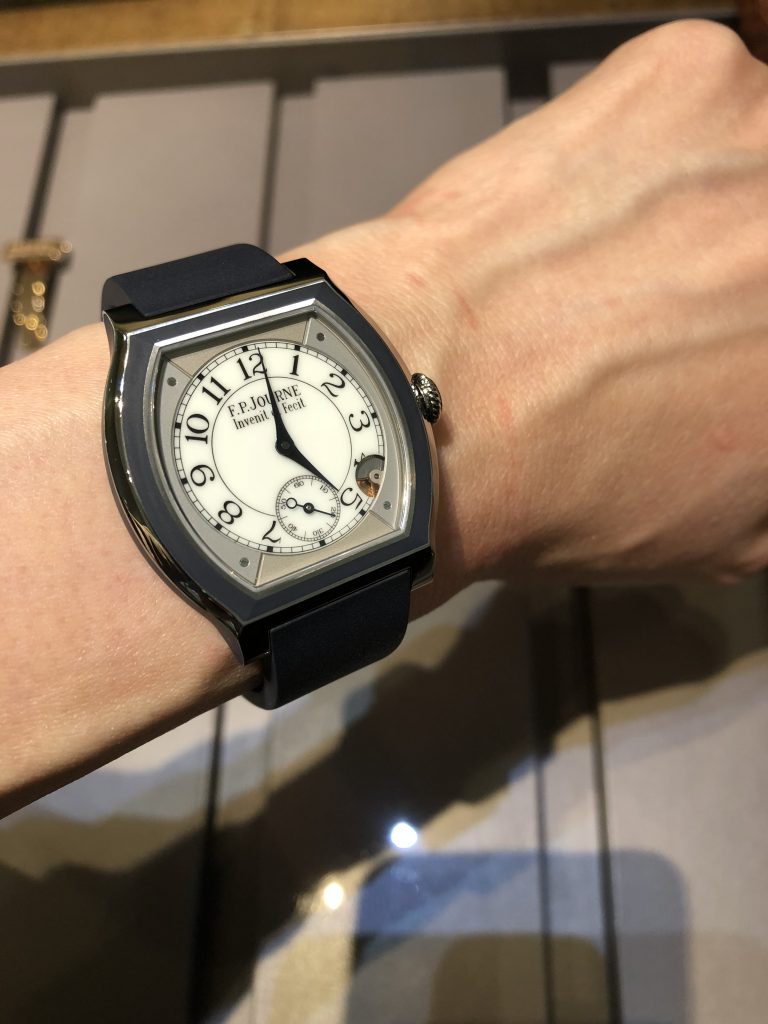 It was then my turn.  I do not (yet) own a Journe, but the collection which piques my interest is the Octa Automatique line.  I like automatic movements and a date, which are becoming almost requirements as experience refines my tastes as a collector, and I find the asymmetrical dial layouts very chic.  Rather like an avantgarde Lange 1.

Apart from price (these are not cheap watches), my hesitation is the size.  The current production is all at 40mm and 42mm.  Slightly too big for me – the old 38mm size was perfect. 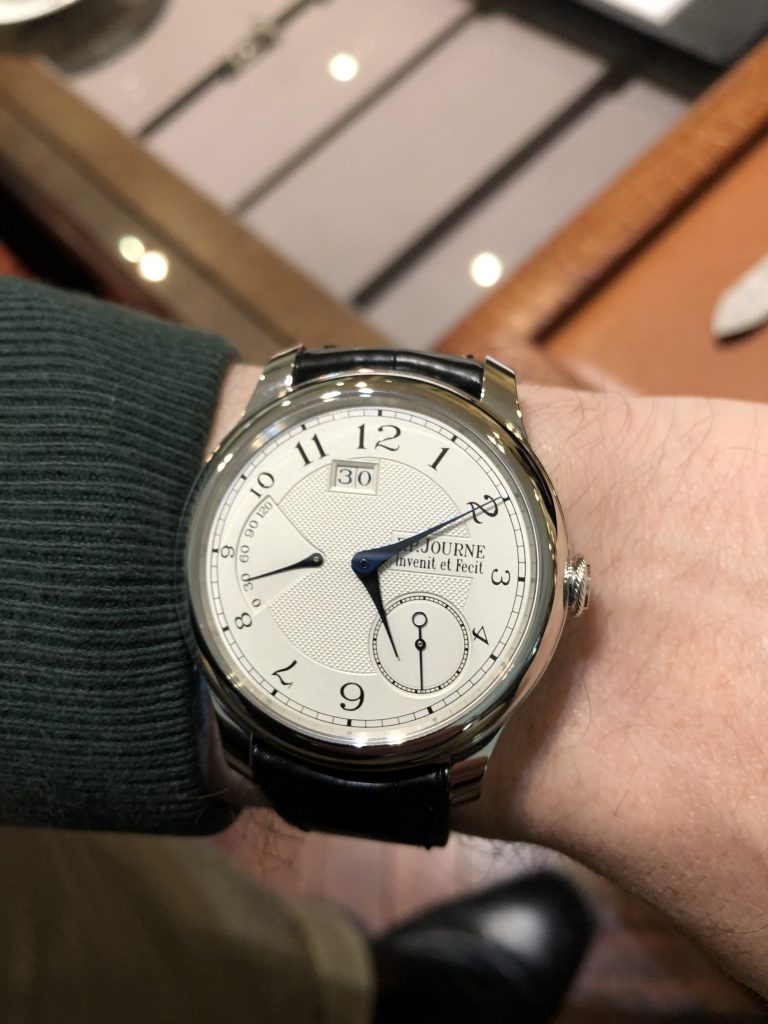 A little too much bezel for the size of the dial and a little ungainly on my smallish 16.5cm wrist (platinum version in 40mm pictured above).  I also tried on the UTC version (also platinum).  I liked the aesthetic of the dial, but the salesman freely admitted (and I had to agree) that the world map disc was not particularly legible.  This is due both to its size and M. Journe’s (laudable) ambition in projecting both the entire northern hemisphere and the populated parts of the southern hemisphere (excluding only Antarctica) on the map.  Even as a resident of the often-neglected southern hemisphere (which only about 10% of humans call home), I think that the map would have been clearer with only the northern hemisphere indicated. 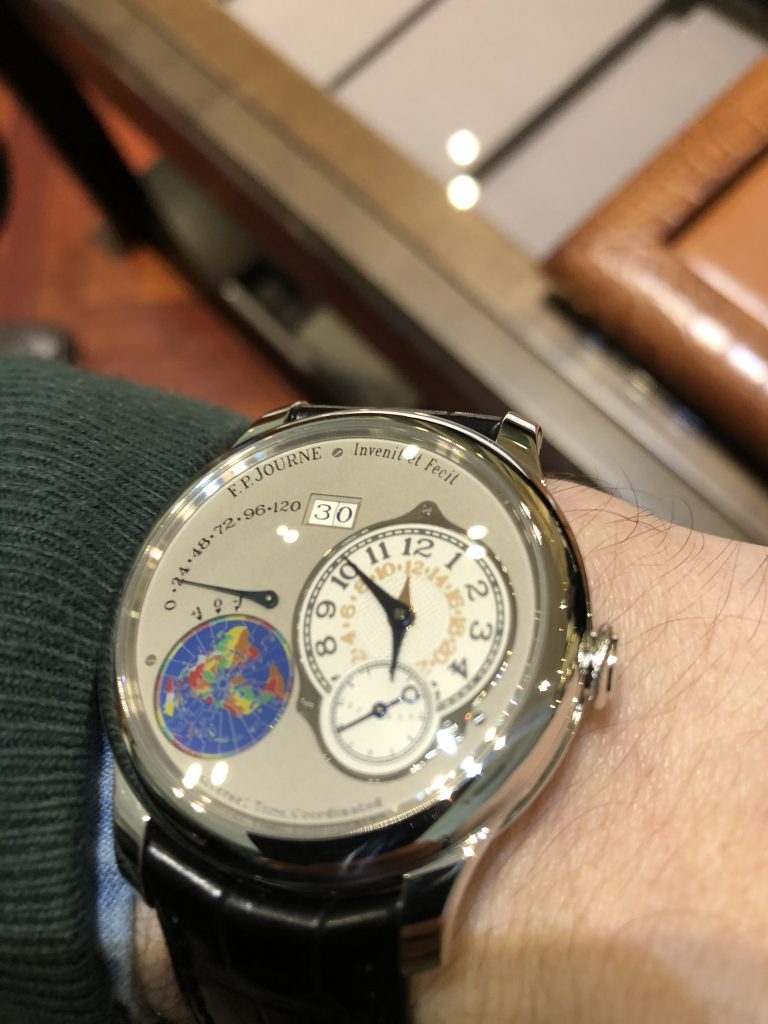 Having tried the 40mm, I asked if they had anything remaining at the old 38mm size.  They pulled out this watch, with a limited edition mother of pearl dial (and moonphase).  The proportions were great, but I was not completely sold on the dial. The bright blue numerals on ground of mother of pearl were a little too flashy for my taste. 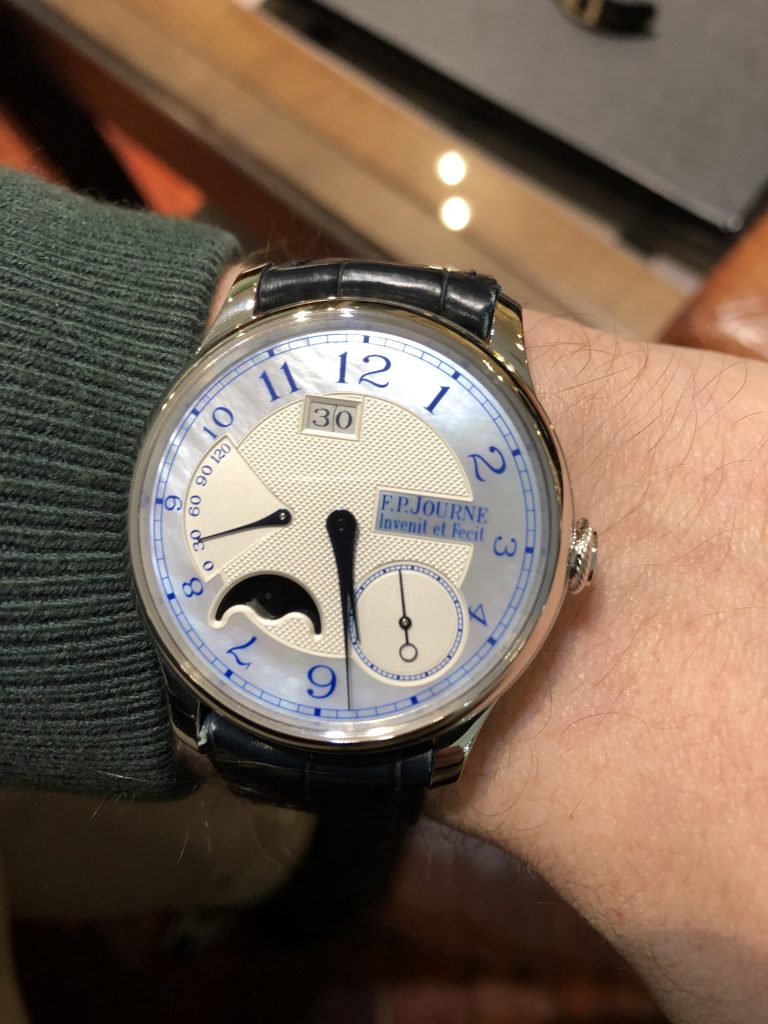 Finally, I asked to try on something special.  The sales associate and I consulted the catalogue and he suggested the Souveraine Minute Repeater.  He took evident pride and pleasure in showing me the watch, even though I was not a serious customer for the piece. 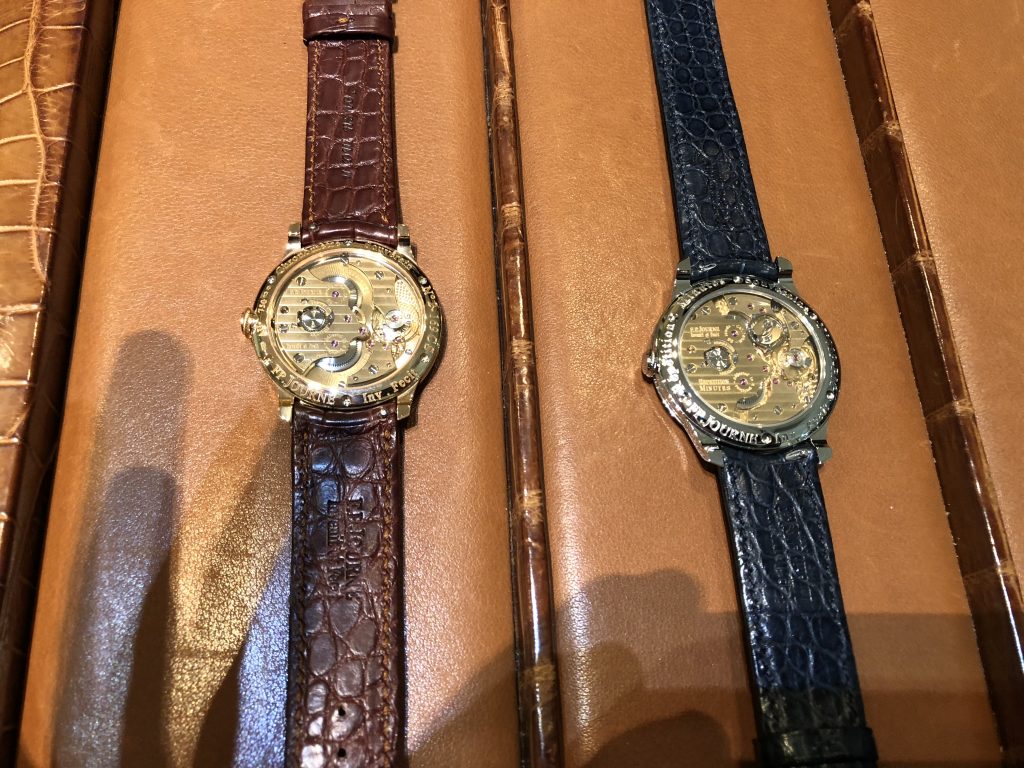 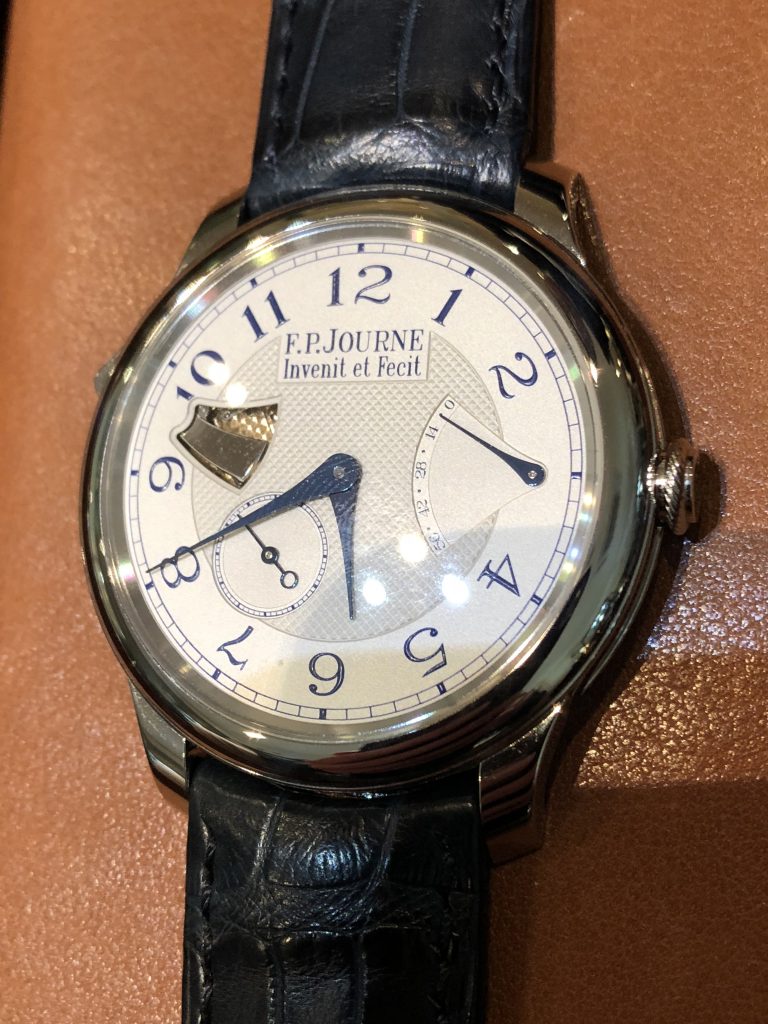 I am far from an expert on minute repeaters, but I found the chime on this one exquisite.  A watch dreams are made of.  Apparently, the boutique sells no more than three such watches a year, all to seasoned collectors of the brand.

In between trying on watches, we had a very interesting discussion with the sales associate, who was also very charming and understanding with our 8 month old son (the charms of this temple of horology being lost on that simple soul).  Among other things, he confirmed the limited production of the brand (about 850 pieces in total per year).  We also discussed the customer base of the boutique (about 50:50 locals and foreigners) and the reason for the slightly off-centred mounting of the rotor on the Octa Automatique (which is, apparently, a vestigial sign of a last minute rethink of the architecture of the movement by M. Journe).

We thoroughly enjoyed our evening at the boutique, and were greatly impressed by the generousity of the brand and its staff.  For a watch lover with half a day to kill in Tokyo, I recommend first visiting the Nezu museum and its delightful garden (located right next door), then stopping at the Journe boutique for ‘dessert’.  That itinerary is a celebration of the high aesthetic cultures of both East and West.

The boutique is open from 10am to 6pm.  It is closed on Sundays.  The address is Collezione 6-1-3, Minami-Aoyama, Minato-ku, 107-0062, Tokyo.  Take exit A5 from Omotesando station and follow the road down the gently sloping hill to the boutique.