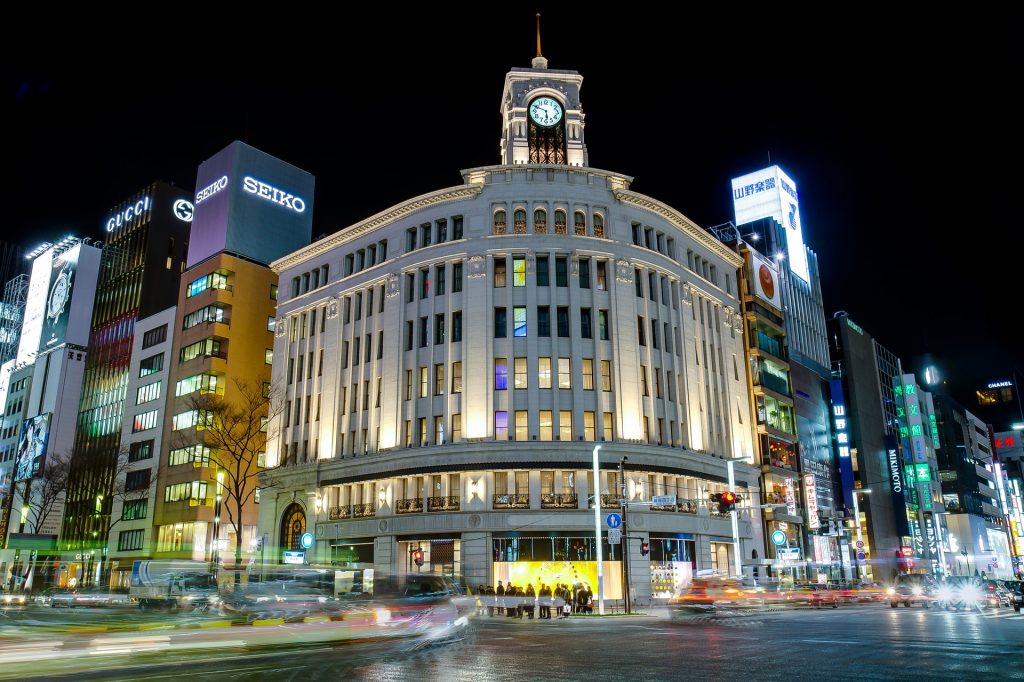 My guide to used watch shopping in Ginza, Tokyo’s most upmarket shopping precinct.

Located close to the south-east corner of the Imperial Palace, Ginza has played a prominent role in Japan’s modern history.  Following the nation’s opening to the world and the Meiji restoration in the mid-nineteenth century, Ginza was the first area in Tokyo developed in a predominantly western style.  Ginza’s image as a chic, international place to see, and be seen, has endured the 1923 earthquake, the second world war and the collapse of the ‘bubble economy’ in the 1990s (in the 1980s, Ginza real estate was the most expensive in the world).

Today, it is packed with flagship boutiques from all the major names in luxury.  Of course, this includes watches, with all of the Swatch, Richemont and LVMH group brands (among others) having showrooms in the area.  It also has a number of very good used watch shops which, in keeping with Ginza’s genteel image, tend to be better organised and fitted out than the shops in Nakano, Ueno and Shinjuku.  Despite this, the prices are generally pretty similar.

Here is a rundown of my selection of the best shops.  They can all be accessed within a few minutes from Ginza station, which is on the Ginza, Marunouchi and Hibiya subway lines.  A word of warning – the traditional day off for shops in the area (including some of the brand boutiques) is Wednesday, so don’t plan your watch hunting for that day, if you can avoid it. 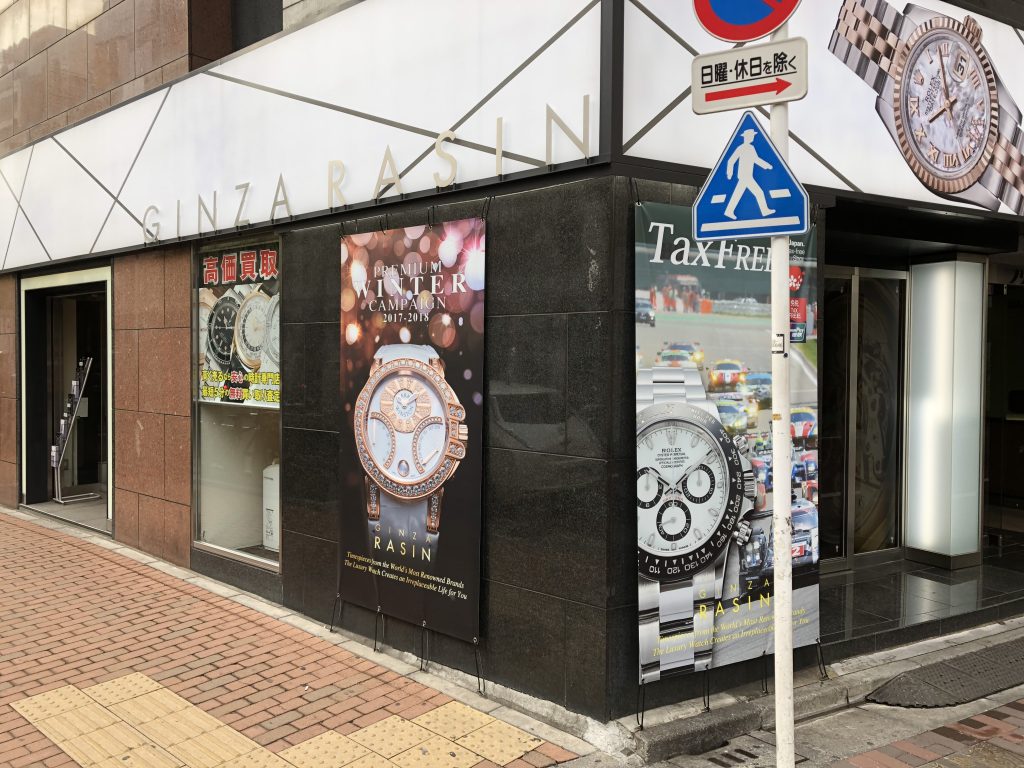 At the southern end of Ginza, closer to Shimbashi station than to Ginza station, is this reliably-excellent shop, which combines a broad inventory with helpful and patient staff.  On my last visit I tried on this 34mm quartz AP Royal Oak ‘Championship Edition’, in tantalum and stainless steel.  I think that the industrial grey-metal sheen of the brushed tantalum works very well with the design of the Royal Oak.  Also, the use of a metal so far down the periodic table (Ta 73) gives the watch a satisfying density (to me, it felt heavier than 18k gold) that belies its ultrathin, wrist-hugging proportions.  A satisfying piece, on several levels. 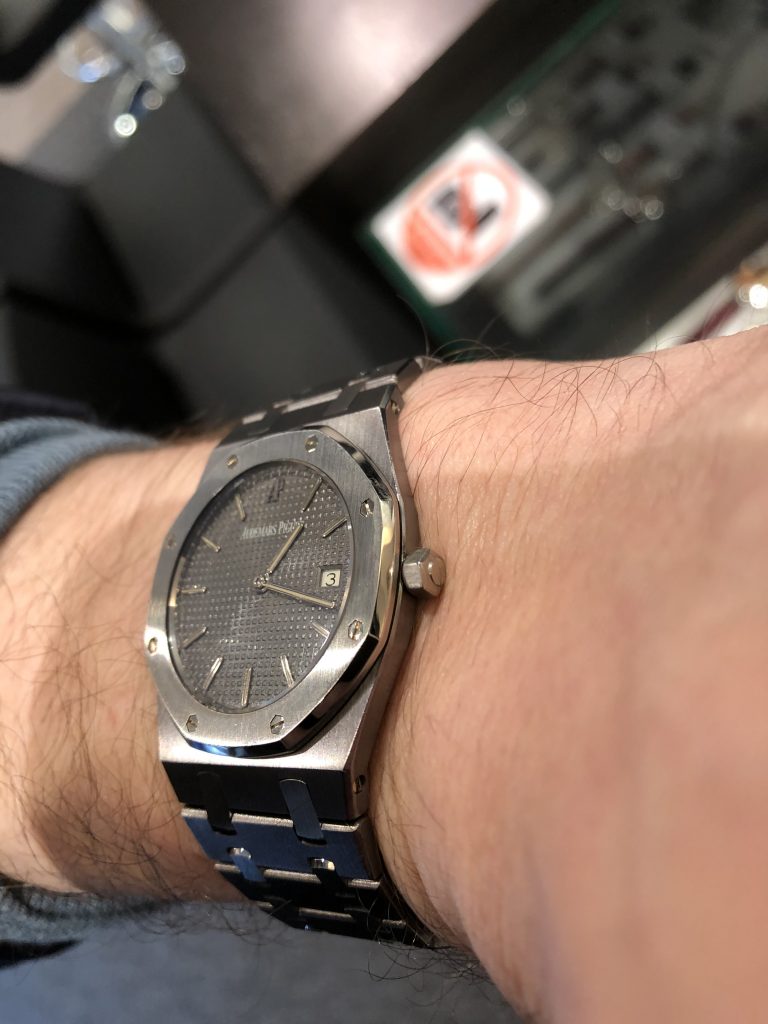 Staying in the realm of the luxury sports watch, I was impressed with this VC Overseas Dual Time. 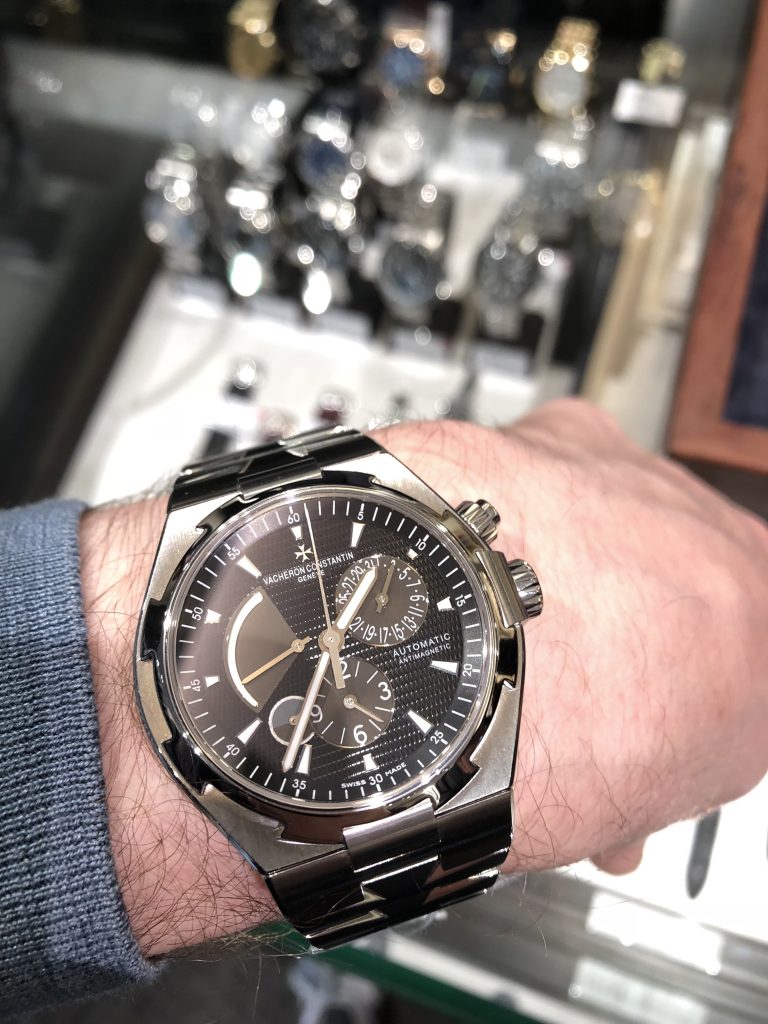 I do, however, have two little niggles.  First, the watch is rather thick, an issue which is magnified given its relatively large span across the wrist.  Second, the dual time is set up in a manner opposite to my preferences.  In my mind, the logical way the complication should operate is for the ‘local time’ at centre to (i) be adjustable in hour increments from the crown and (ii) drive the date.  That way, when you move between timezones, it is easy to keep the local time and date synchronised to your location.  On this watch, it is the ‘home time’ at 6 o’clock that can be quickly adjusted and is linked to the date.  I believe this watch uses a JLC ébauche which has also been used by AP, so I assume that the same criticism holds true for all watches with this movement. 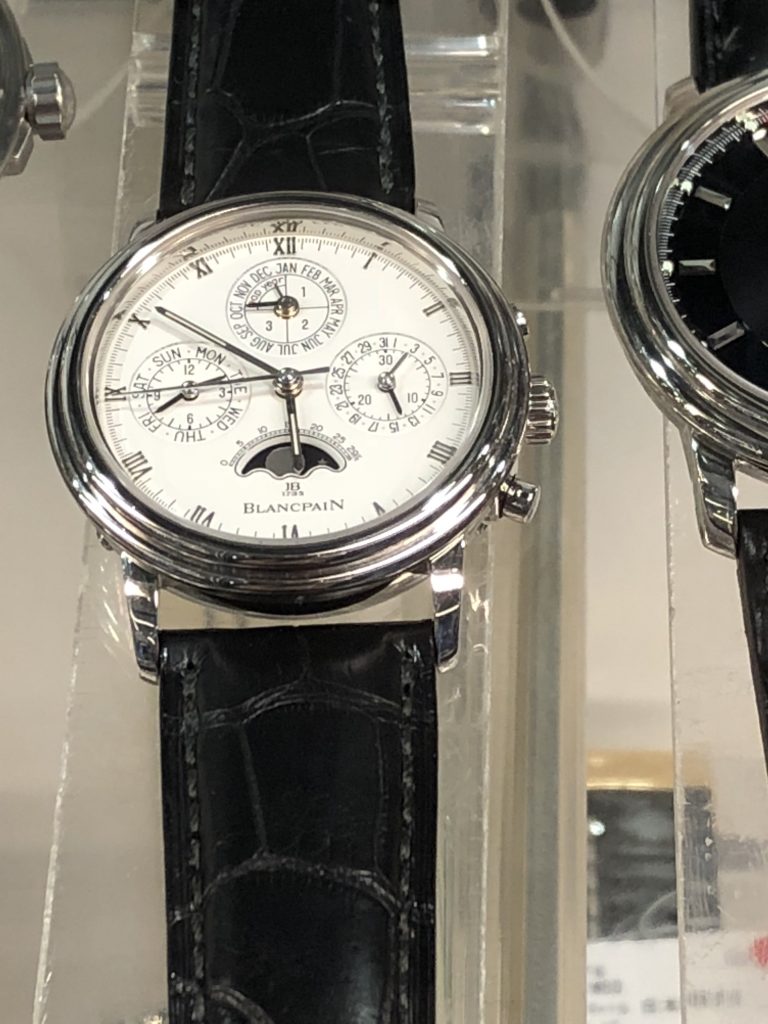 And one for the anoraks.  A vintage Grand Seiko VFA, the very pinnacle of Seiko’s production from the sixties and early seventies, designed to compete with the Swiss at the observatory competitions.  If you are interested, take a look at KIH’s write-up over at PuristSPro. 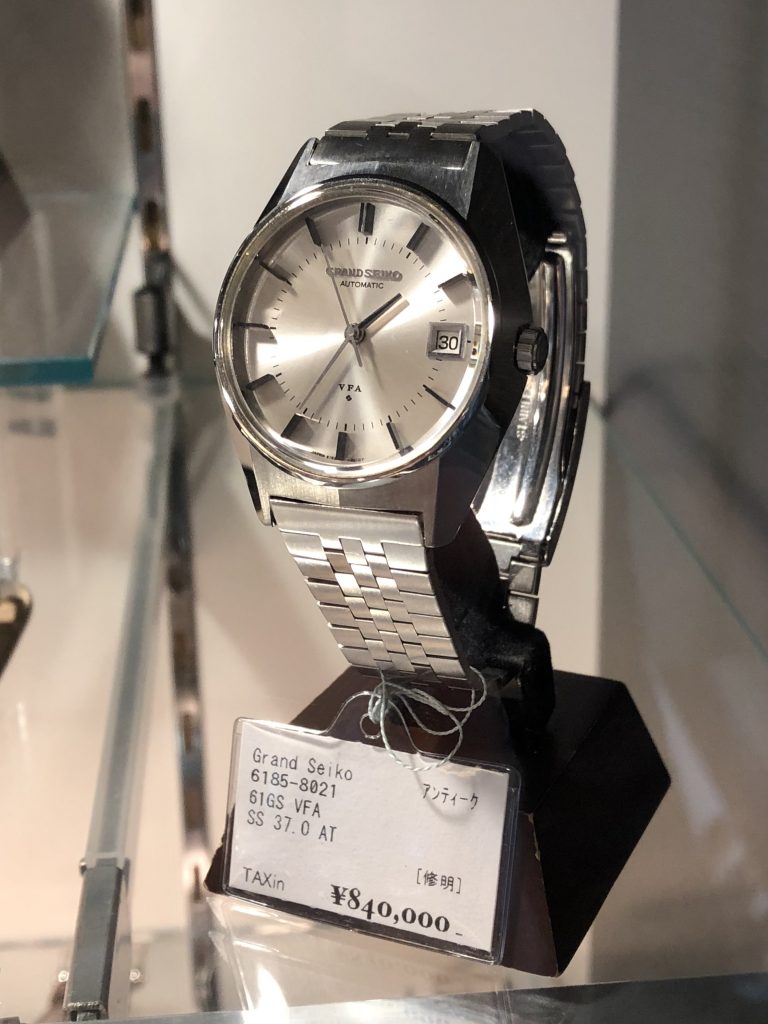 Sullenly lurking in the background, aware of its own superiority, was this stunning grey-dial Lange Double Split.  It was still slightly upset about being ‘out-splitted’ by its new big brother, the Triple Split, and about having to share cabinet space with so many inferior pieces. 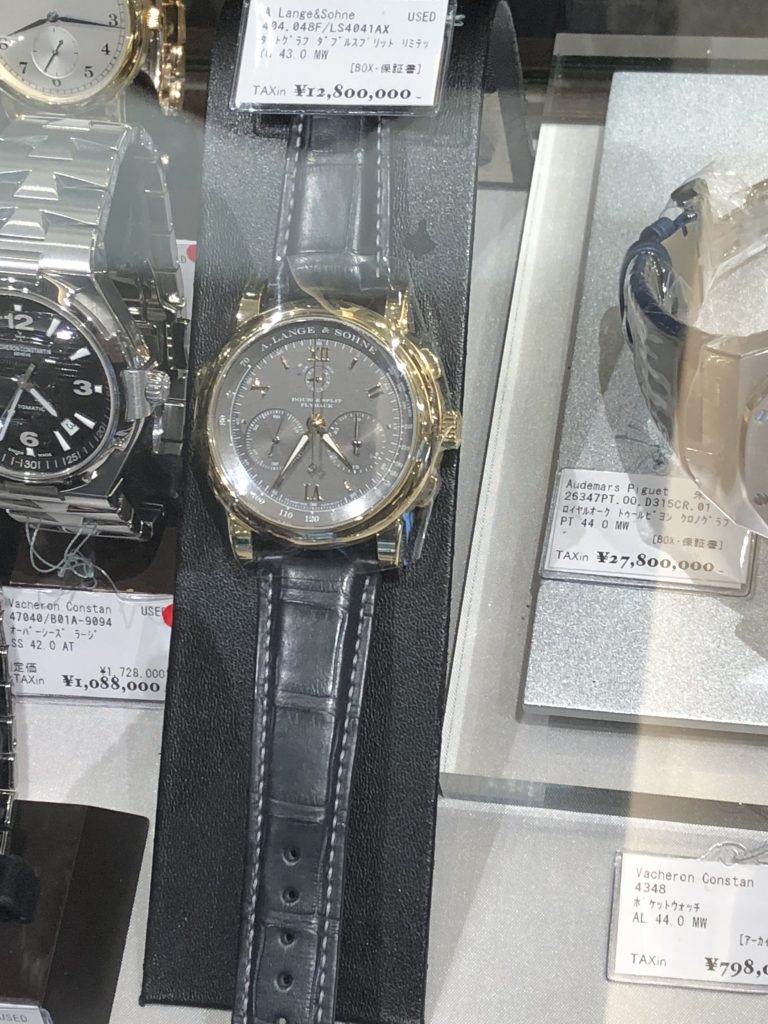 Of course, there were many other interesting watches on offer.  Ginza Rasin should be at the top of the list to visit in Ginza. 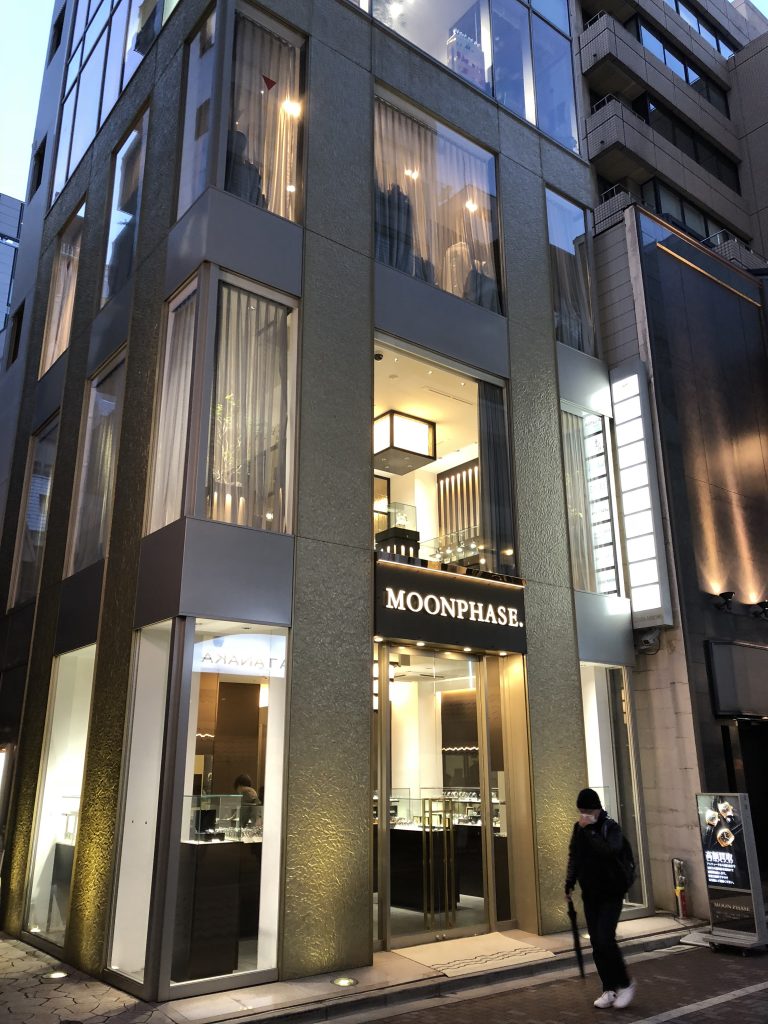 The kind of shop where the watches you wish to try are brought to you at a comfortable lounge and you are bribed with free beverages.  Friendly staff and a pleasure to browse, however, the inventory seems to have slipped a little.

The only watch that I wanted to try on during my last visit was this Breguet Marine Big Date Ref 5817 and, frankly, this is not a watch that is on my hitlist. 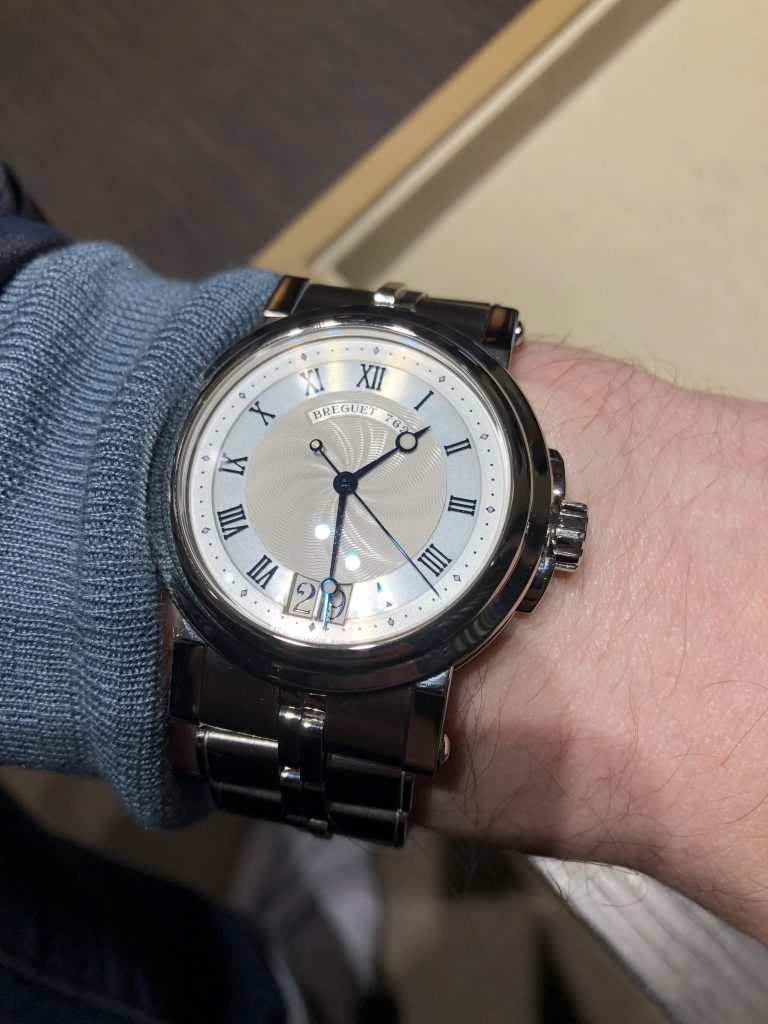 The shop does, however, have a pretty good vintage range.  In particular, it is a good place to pick up a Rolex bubble-back, if that’s your thing (I like them, but know nothing about them, and so far have not been inspired enough  to remedy my ignorance). 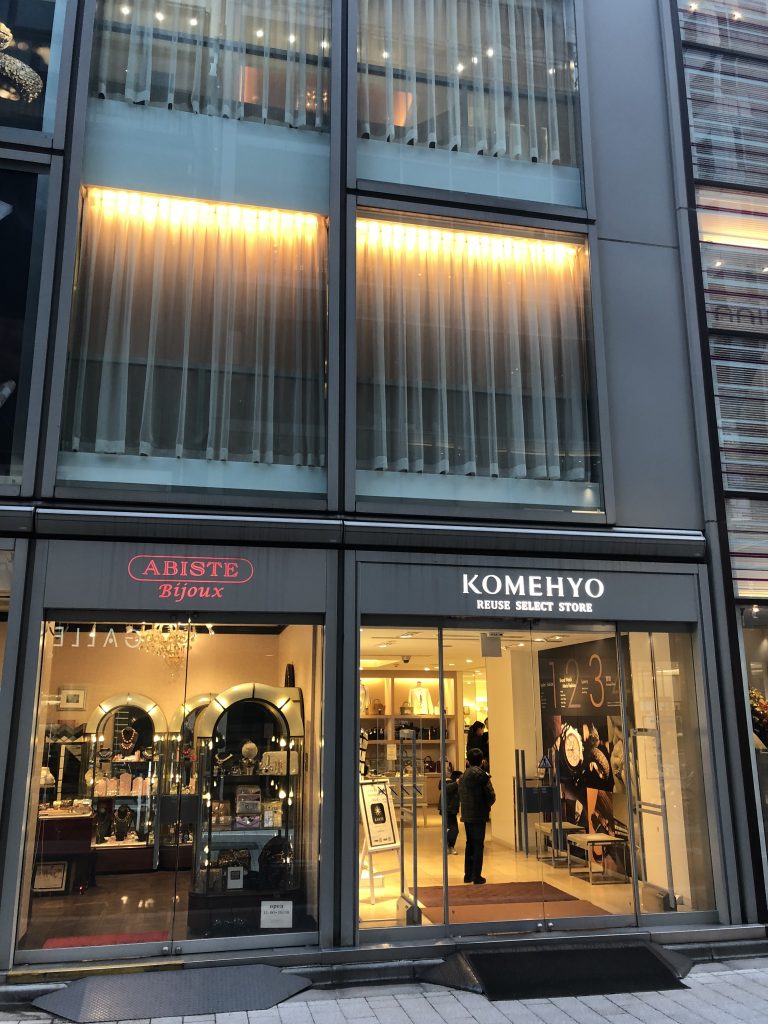 Unfortunately, the Ginza location of this chain is not up to the standard of its sister shop in Shinjuku, either in watches or menswear.  Still, taken in isolation, this shop is above-average and earns a solid spot on the Ginza itinerary.  There is about half-a-floor devoted to watches, including all the usual names.

On my most recent visit, nothing really caught my eye, however, when I passed through a year ago they had two beautiful JLCs – a pink gold/black dial Master Control Perpetual Calendar in 37mm and a rare platinum Master Moon Triple Date (with hunter-style hinged caseback), also in 37mm. 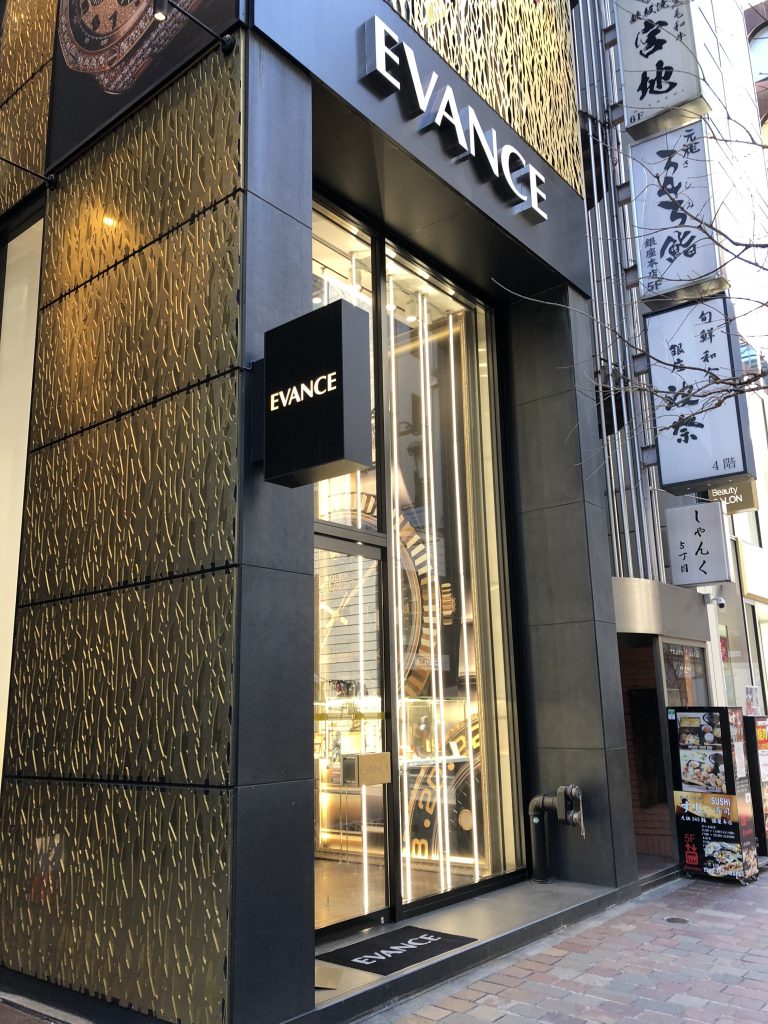 Small selection of expensive used watches on 1F (think bejeweled Rolexes and Royal Oak Offshores).  On my last visit there was a beautiful Breguet tourbillon, but nothing of interest within my price range (below $25k USD).

High end branch of the Nanboya pawn shop chain.  The watches are on 2F and the shop has a surprisingly good selection, at excellent prices.

On my last visit, they had two wonderful Vacherons.  The first was this Triple Date Moon Phase in 36mm, from the brand’s nineties Les Historiques range, a line which played an important part in the post-quartz mechanical watch renaissance which gathered momentum in that decade. 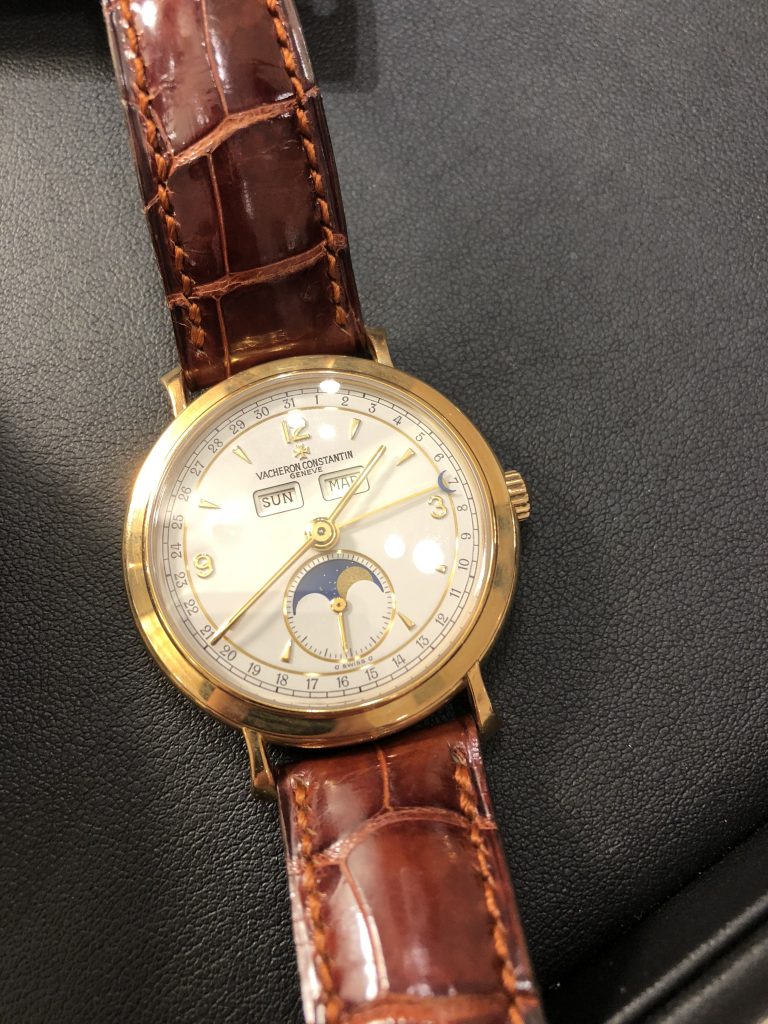 The other watch was an even greater delight – the uncommon Jalousie ‘shutter watch’, in 18k rose gold (the case) and 18k white gold (louvres, crown and case back), from a limited edition of 125. 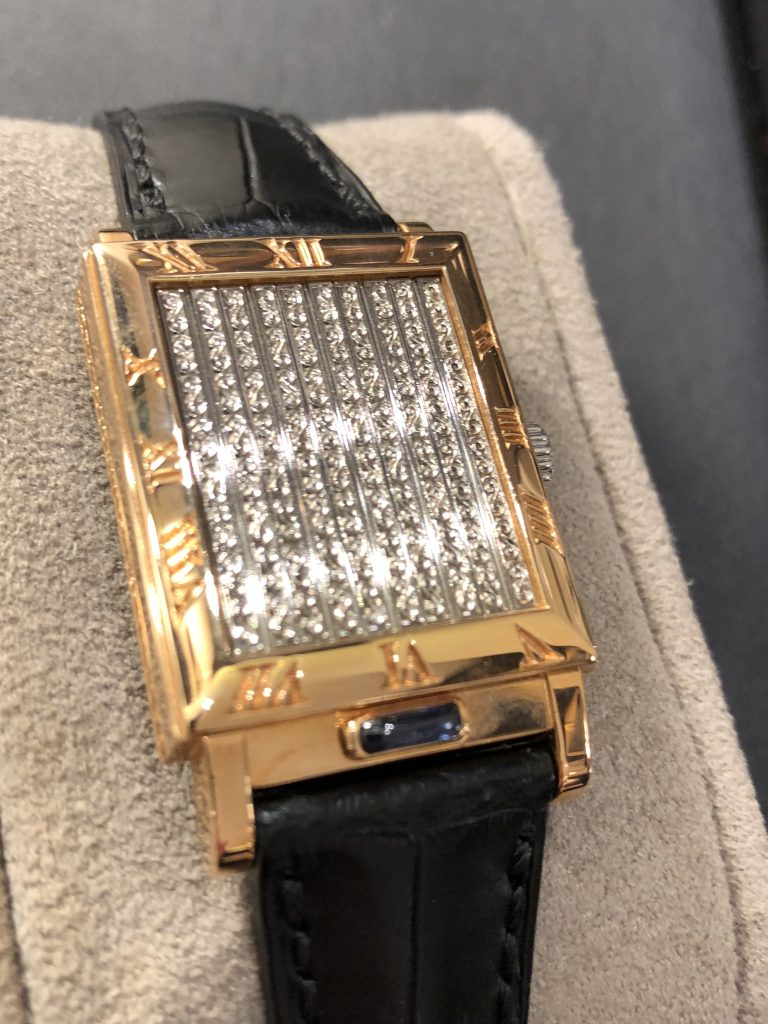 The louvres are decorated with an engraved scroll pattern, and reveal the dial in the manner of a vertically-mounted venetian blind when the slide at 6 o’clock (embellished with a cabochon sapphire) is moved to the right. 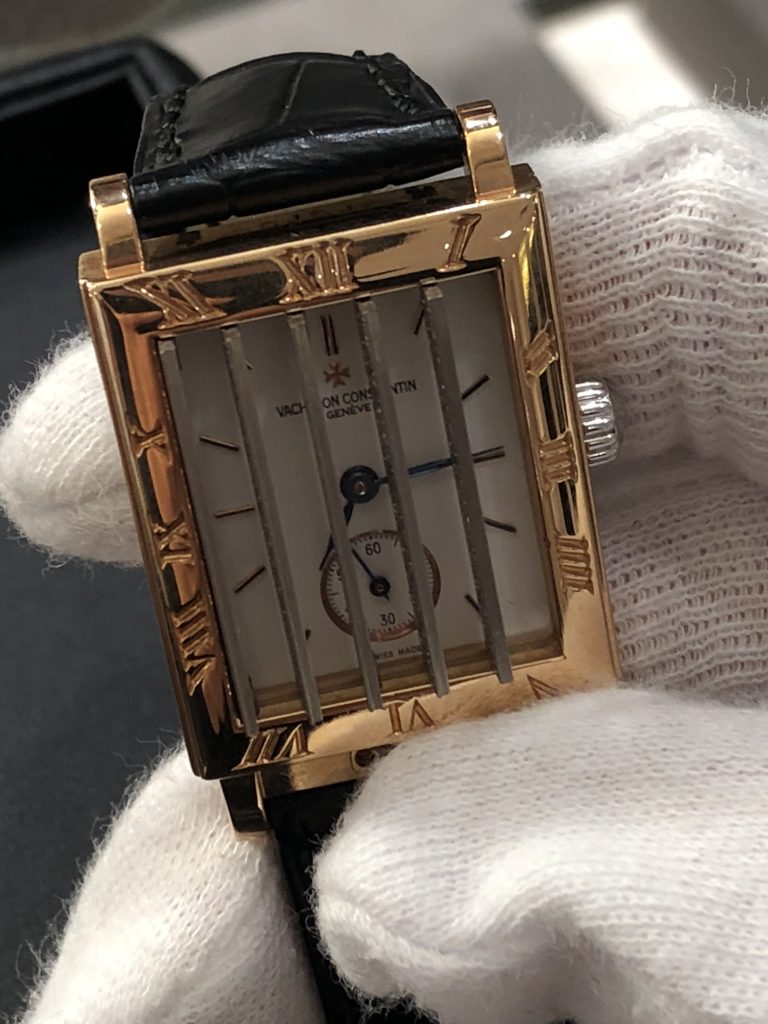 I had low expectations for ALLU, as I had previously been disappointed by the section on offer in other Nanboya branches, however, this one is a must-visit. 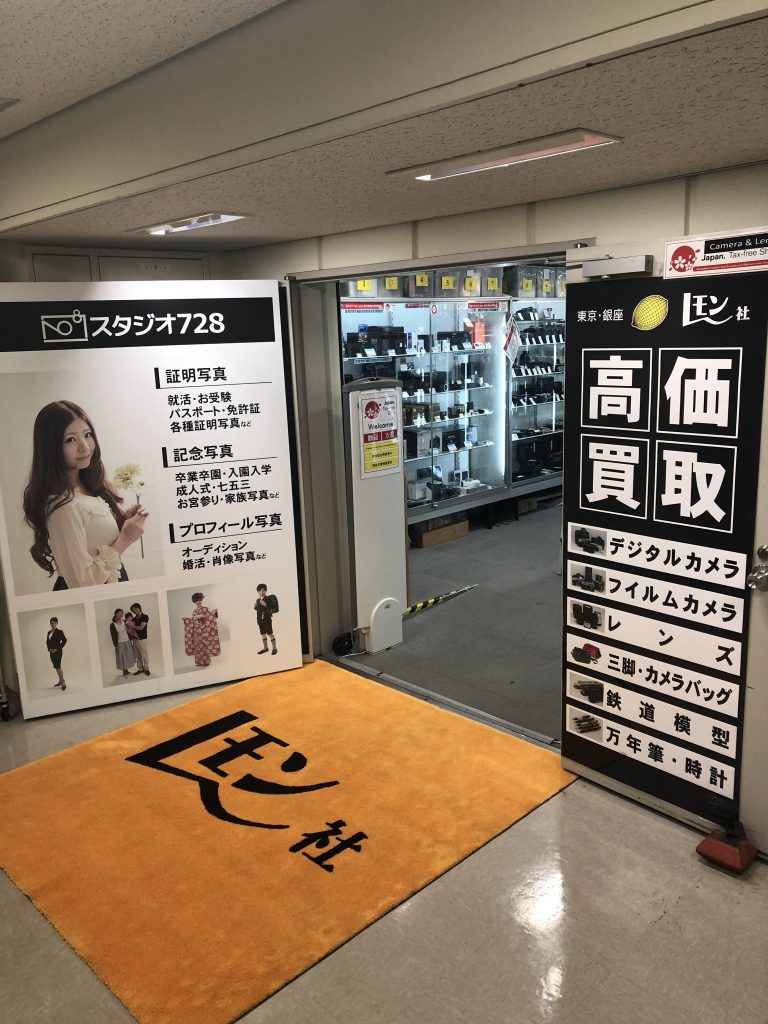 High profile camera-focused place, similar to those in Ueno, which was the subject of a Hodinkee article, written by Ben  Clymer himself no less, and has received pretty wide coverage in the English language press.

Perhaps its reputation is in part due to the eccentricity of its location, on 8F in a building predominantly occupied by a church.  The camera collection may be wonderful (I cannot judge), but the watches are only average, comprising a ragtag assortment of mostly low-quality watches, with the odd decent piece thrown in (and usually overpriced, in my opinion).

Daikokuya has two locations in Ginza.  The first (near Komehyo) looks like this.

The second, at the Yurakucho end of Ginza, looks like this. 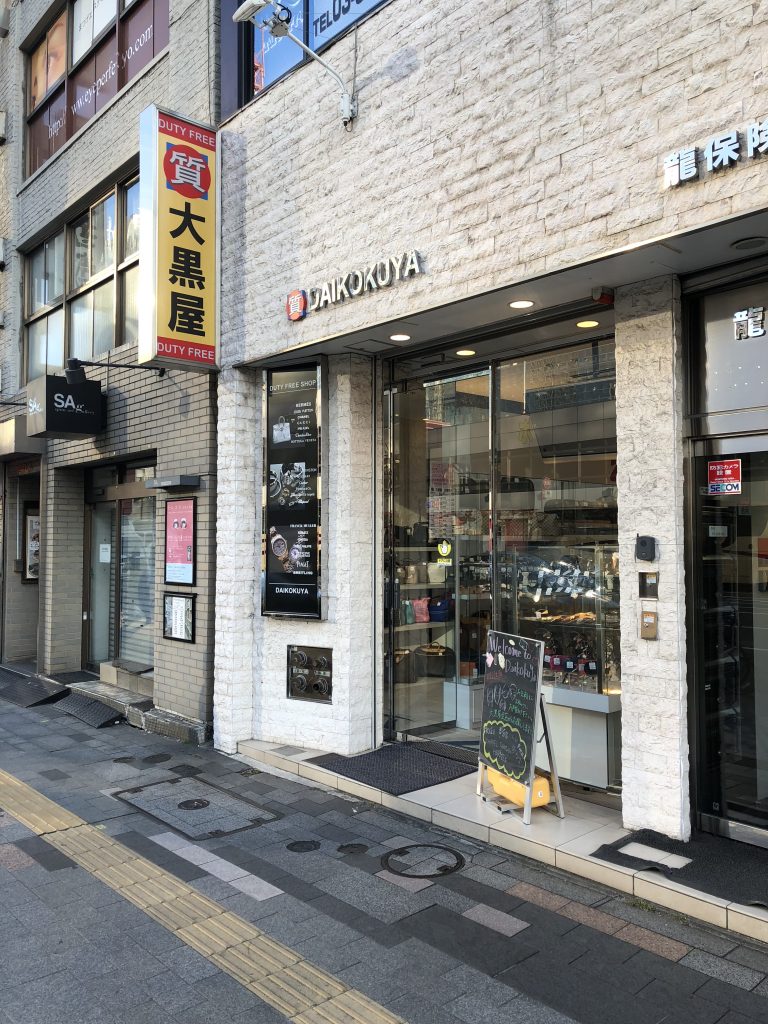 For whatever reason, these two branches feel like neglected outposts of the Daikokuya empire, compared to the excellent shops in Nakano, Ueno, Shinjuku and Shibuya.  They should be on the itinerary because of their keen pricing, but I would not expect to find anything particularly interesting at these shops. 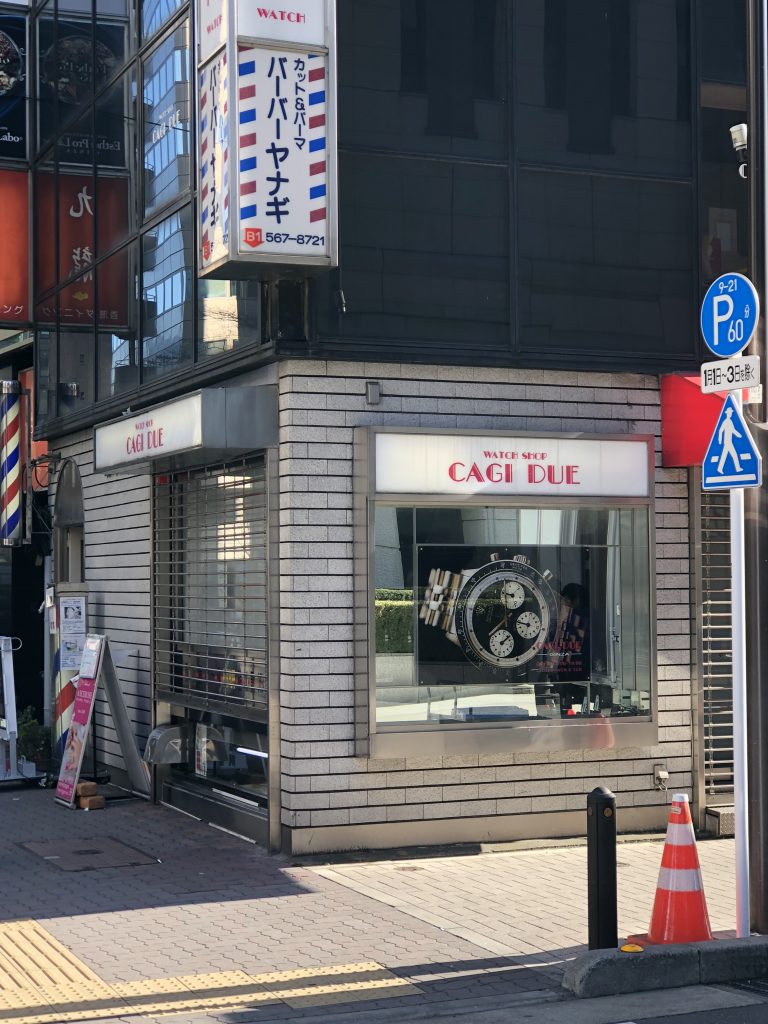 Interesting little shop, obviously run by connoisseurs, with rare and desirable watches at generally very fair prices.  On my last visit they had a gorgeous F.P. Journe Vagabondage 2 sitting in the window, looking comely, for around $50k USD.  If they could keep more of their watches in stock at the same time, this shop would earn a 9/10 – the eager shopper is often frustrated by the lack of options.  Earns a definite place on any Ginza itinerary though. 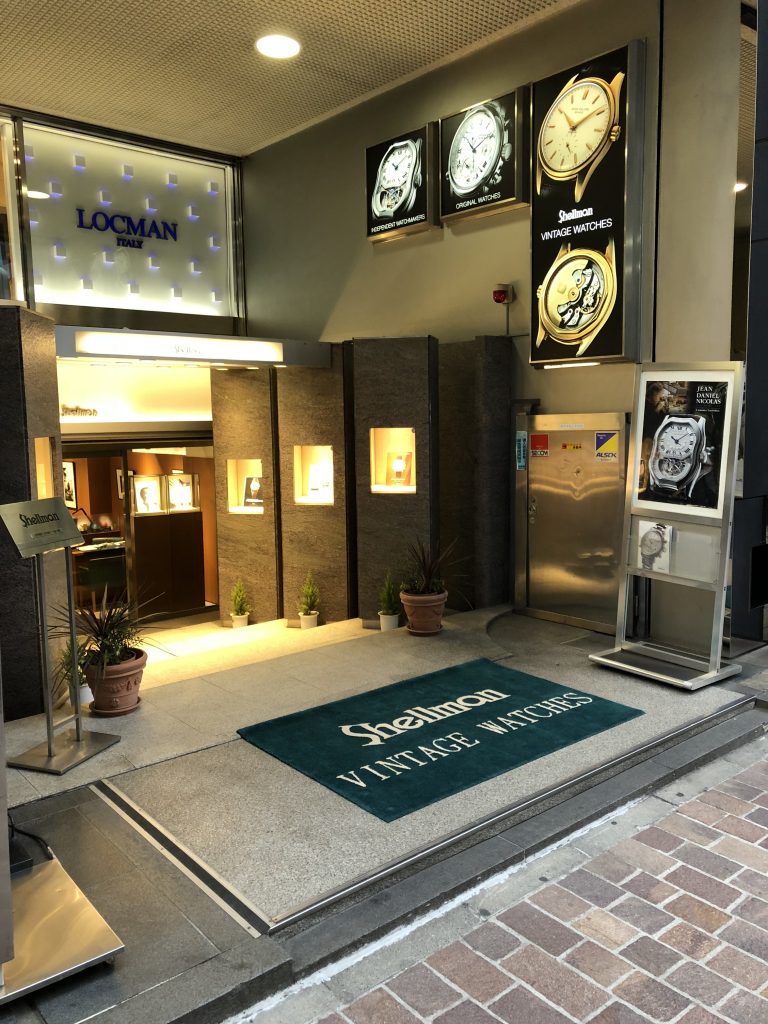 One of the most famous shops in Ginza, Shellman sells and services high-end vintage wristwatches and pocket watches, original creations from independent artisans, interesting and affordable new watches from Wempe and Habring (among others) and its own line of Shellman ‘grand complications’, made in quartz and steel to ensure accessible pricing.  I like the Shellman watches, in a kitschy way, and may look at adding one to the collection at some point (particularly the minute repeater, if I can find one used).  You can have a look at them on Shellman’s English website here.  Jack Forster wrote an excellent article on the peculiar appeal of the Shellman watches for PuristsPro back in 2005, which you can read here.

My only issue with the shop is that the vintage watches appear to be very fulsomely priced – this is not a place to get a bargain.  Having said that, I’m sure that the shop does an excellent job servicing the pieces to get them ready for sale, and I would be very confident in the provenance of a piece bought at this shop.  An essential shop for any vintage fan and recommended for all collectors. 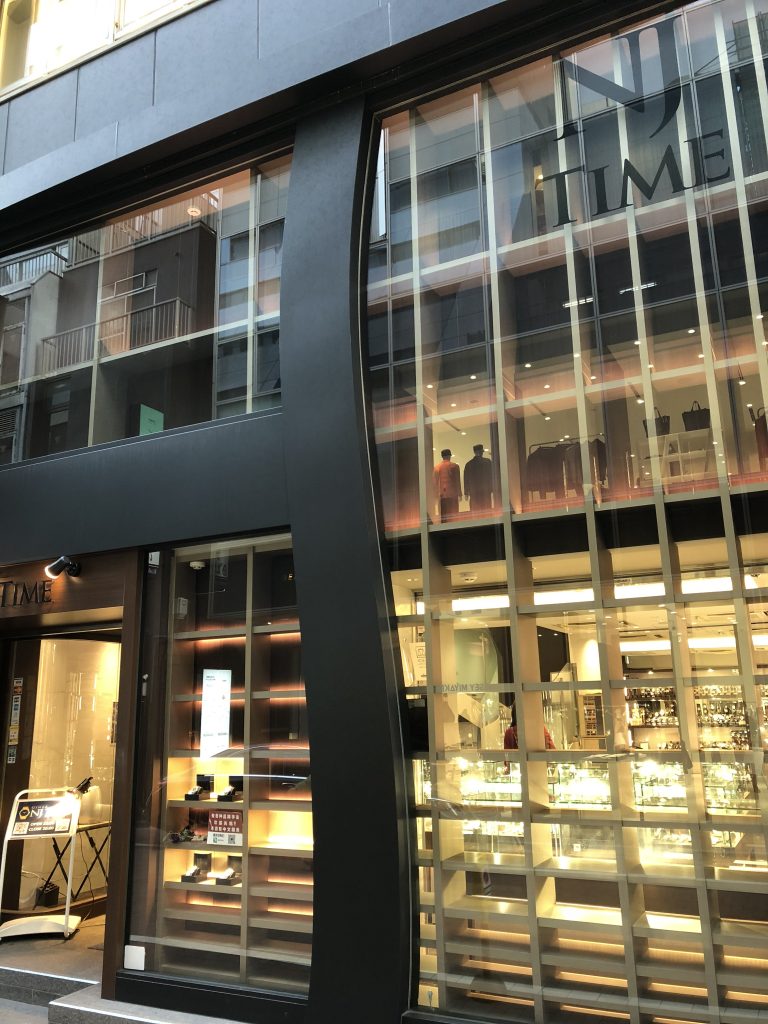 Big shop, selling 85% new and 15% used watches (mostly modern stuff).  The selection is typical, but large, and prices are about average.  One of those shops that there is little to say about, but should be on the itinerary.

For the watch collector who is also interested in art, I would recommend a visit to the gallery of S. Watanabe, a famous publisher of Japanese woodcut prints.  It is named for Watanabe Shōzaburō (1885-1962), who was instrumental in the popularisation in the early twentieth century of the shin hanga style, commissioning and printing works by such artists as Kawase Hasui and Yoshida Hiroshi.  The company is still run by his descendants.  A great place to buy prints by these artists made using the original woodblocks, at an affordable price. 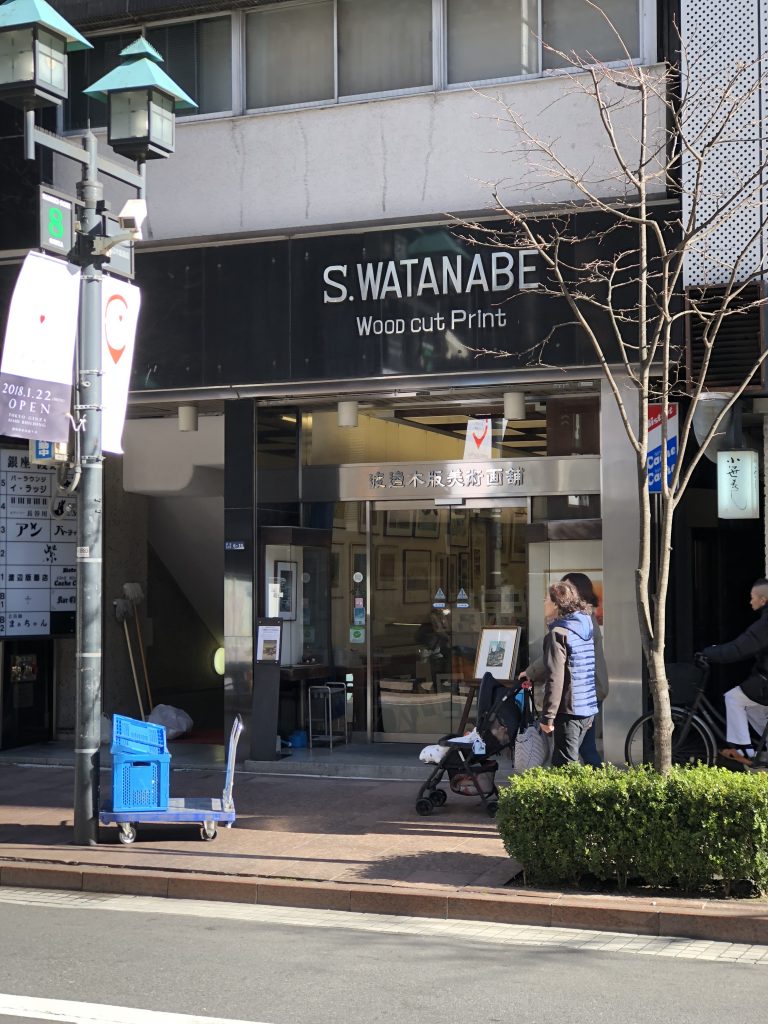 Another great place to go is 6F of the lavish new Ginza Six shopping mall, which houses a huge branch of Tsutaya, the amazing Japanese bookshop chain specialising in art books.  Pick up a book and leaf through it while you have coffee in the attached Starbucks (hopefully with your new love sitting on your wrist).